Visual Literacy Today defines visual literacy as "... the ability to read, write and create visual images. It is a concept that relates to art and design but it also has much wider applications. Visual literacy is about language, communication and interaction. Visual media is a linguistic tool with which we communicate, exchange ideas and navigate our complex world."

The visual is a foundational means of communication, and visual literacy is an essential skill in our current social and economic environment. For most of us, our sense of sight is one of the primary ways we encounter the world. We begin learning about the world through the visual well before we have the ability to learn to read text, which expands our understanding of the world around us. When we are taught to read, we begin with images in association with letters and small words, as in the illustration here.

[Optional] If you want to read more about the subject of visual literacy, click here.

We are constantly exposed to the visual in our daily lives, especially through our frequent interactions with media, whether in ads, shows and movies, a Google search, texting (emojis!), using social media (memes!), or doing research in a library database. Our visual environment can have a huge impact on our lives, and because of this we need to be able to evaluate images' underlying purposes as well as their credibility.

Have you ever been fooled by a photoshopped image that's done so well, it looks like it's an actual photo? The image here is "a retouched picture, which means that it has been digitally altered from its original version. Modifications were made by Mmxx;" this image is licensed under CC BY-SA 3.0. The image here doesn't hide the fact that it's a compilation of 16 photos, but others are often meant to be taken for the truth:

Social media apps and other programs are used constantly to show us an ideal version of reality. This is especially common with photos of celebrities, as in the example here: 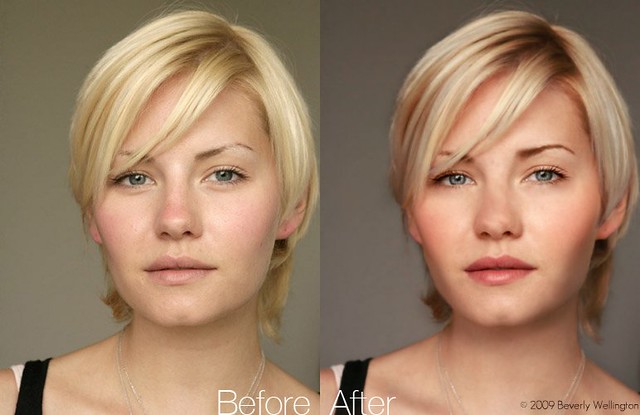 "Before and After" by beverlyislike is licensed under CC BY-ND 2.0.

Advertising uses images, words, and sounds to create favorable impressions in viewers in order to sell products. This video, with the sound off, could be about virtually any large, biotechnology company.

Yet, with the sound on, the narration gives away the store: this is how advertising works, using images and sounds to stir emotions and positive feelings that might not be entirely deserved.

But the issue is not just what the ads say and don’t say (or how they say it or don’t say it), it is how pervasive they are that gives them power to shape public discourse. Derren Brown, a British illusionist, wanted to show the influence that image placement and advertising can exert on people:

Consider the adage "a picture is worth a thousand words." Images communicate differently than words, but they still convey ideas; often, images convey a large amount of information in a more compact package. Both text and images can be analyzed on a deeper level, once we have the basic meaning down. Being aware of the deeper meanings and implications of the visual, as well as developing a wider visual "vocabulary," is an important skill to have in our media environment. As participants engaging with this environment, we also need to be able to use images to communicate and we need to know how to do so responsibly, by citing sources.

When we're using images to communicate, especially in a paper or presentation, it's important to cite them, just as we do with textual sources, and for exactly the same reasons. In a presentation, this can be the inclusion of a citation on a Powerpoint slide, or a simple verbal acknowledgement ("This image is from..." "This work of art is by...").

Read more about citing paintings, sculptures, photographs, films or movies, tv shows, and digital media on the Purdue OWL. (Scroll down to find examples of citations for each of these visual sources.) You can find additional sources on citations, copyright, and fair use in the visual arts in the box below.

Citations, Copyright and Fair Use in the Visual Arts

Copyright "is a form of protection grounded in the U.S. Constitution and granted by law for original works of authorship fixed in a tangible medium of expression. Copyright covers both published and unpublished works." Learn more here.

Fair Use allows "the unlicensed use of copyright-protected works in certain circumstances." Learn more here.

The MLA, Chicago, and Turabian citation styles may be used in writing about art. Check your syllabus or contact your professor to find out which style they prefer.

ARTSTOR's guides to Using Images and Copyright, including Citing Sources

College Art Association Guidelines regarding Fair Use and Copyright:

Statement on Fair Use from the Visual Resources Association