Information Literacy Session 2: Evaluating Sources: What are we up against?

But the problem, deep as it seems here, is even deeper!  The fact is, we all have our own sets of biases. Cognitive biases are in-born patterns of thinking that deviate from logical and/or rational judgment. In other words, they are errors in perception that arise not because someone has tried to persuade us or given us bad information, but because we let our own biases cloud the information. There are many different kinds of cognitive bias. Click on the chart to see more!

If information were easy the world would be perfect. We would rely on accurate, timely sources to inform our decision-making.  Ethically produced science that had been thoroughly peer-reviewed would guide our actions. Unfortunately, information is created, disseminated, interpreted, and used in a very complicated world. Problems can arise at any point! The one thing that you have control over is how you personally interpret and use information. But even that is trickier than it sounds. People have to overcome all manner of cognitive biases to faithfully interpret incoming information. They also have to be ethical in their approach to using and sharing information, making sure the original creator of the information is given credit. 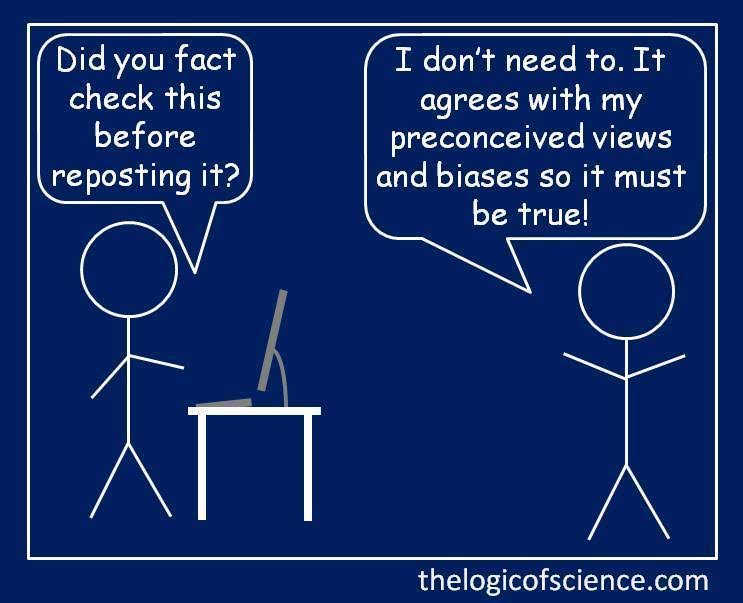 In addition to all the cognitive biases we must guard against, people may likely inherit biases from their culture, nationality, religion, politics, sex, geography, and more. The reasons our minds are so prone to bias go back so far it is almost impossible to imagine. Even in pre-human history our early ancestors, the hominids, had a pre-conscious part of the brain called the amygdala that was responsible in part for delivering fight or flight responses to a threatening stimulus, like, say, a tiger. Though this feature enabled our predecessors to survive, the amygdala is still part of the human brain and has not evolved to keep up with the information demands of modern life. For instance, our brains are hostile to information that goes against our preconceived notions. When we see a new story or a political ad that we disagree with, we literally experience a mild fight or flight or flight response. And in these cases, we debate the information (i.e.: fight) or we change the channel (i.e.: flight). So the same instinct that made us run or pick up a club when we encountered a predator in the wild a million years ago compels us to scroll on by the argumentative friend in our news feed today.

How Do We Fight Bias?

How do we fight bias?

The best way is to try to recognize your own biases, which is harder than it seems because biased people tend to be unaware of their biases. Because of this, it is good to have a checklist of evaluation criteria for reviewing all information equally stringently.

Using a rubric for evaluating sources, that includes accuracy, objectivity, and timeliness, will help you judge all sources fairly, whether you instinctively agree or disagree with them.

Use a research matrix to keep track of your sources as you go, and evaluate them at the same time. Your matrix doesn't need to look exactly like this one, but having a quick reference to all of the relevant sources you find in a single location will save you a lot of time when it comes to writing your annotated bibliography, as well as your final paper.

Your notes or comments section can contain notes for your annotation, or even your entire annotation! You don't need to use all of the sources that you record in your matrix. But using one will allow you to evaluate all of the sources you find, and to determine which are the best for your purposes, all in one place.